M and I had begun our winter breaks from school and Christmas in Strasbourg ended. Which meant it was time for another adventure. This time we headed north for Scandinavia, in January. While this may merit a CAT scan, there was some logic behind this decision, which will be revealed towards the end of our trip.

The first day of our Scandinavian adventure was a travel day, which is terrible to begin with, but this one was especially exhausting. Nothing went wrong, we just left our apartment in Strasbourg at 5:30AM, had 3 layovers and 4 trains that took us all the way to our Airbnb in Copenhagen, Denmark. There was even a ferry ride on a train thrown in there. 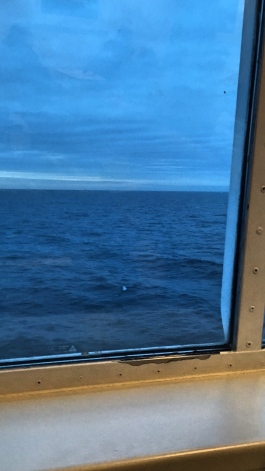 After visiting a nearby grocery store to pick up our Airbnb key, we made it to our little place. So exhausted, we gave up looking for a grocery store and settled on some pizza which turned out to be absolutely delicious!

Our day started with getting ready at our Airbnb. Which usually is not something worth noting but Scandanavian bathrooms are pretty interesting. There is no “shower.” Just a shower head with a drain on the floor. So that was a unique experience.

We started walking towards the city center where there should be some cool sites to see. Stopping along the way for a postcard, sticker, and coffee. We continued to walk the pretty, yet chilly, streets of Copenhagen until we reached this beautiful row of buildings called Nyhavn. 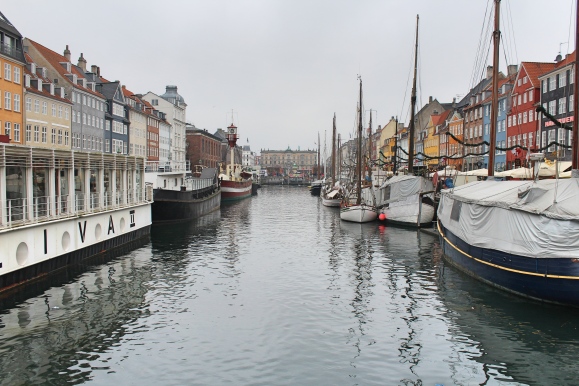 A short while later we found ourselves at the Rosenburg Castle. This unique castle used to be a royal residence but it cost too much to maintain. So now we get to enjoy it. There was even an adorable little mote around surrounding the property. 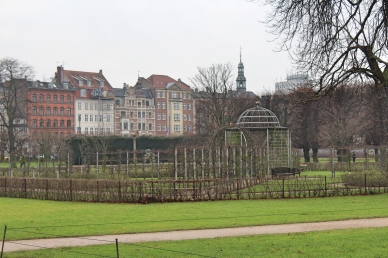 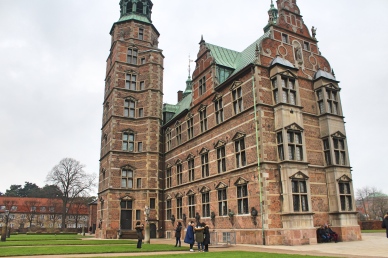 Next, we headed towards the popular Little Mermaid Statue. It was pretty far away but there was some lovely scenery along the very cold walk. The statue was clearly very popular being surrounded by tourists with selfie sticks. 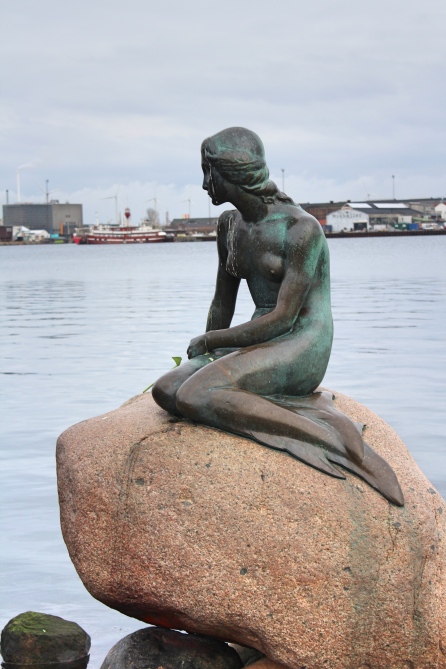 There were a few things left on our list. So we headed towards the subway, but not before stopping at a hot dog stand! We had been advised by the great Rick Steeves that Copenhagen had a thing for hot dogs. Not hard to believe when we have found these little stands popping up all over the city. We found one stand just before heading to the subway, forcing ourselves to stop for a bite. They were absolutely delicious.

After scarfing down our dog, we hopped on the subway and headed for the city center where we caught a bus to the Carlsburg Brewery.

Once arriving at the brewery, we realized this may be a bit more low key then the other tours we had done, Heinkien and Anheiser Bush. It was done a bit on the cheap. There was plenty of very detailed, somewhat boring, information. Every once in a while w would find something cool, like their 22,500+ beer bottle collection or the horses. 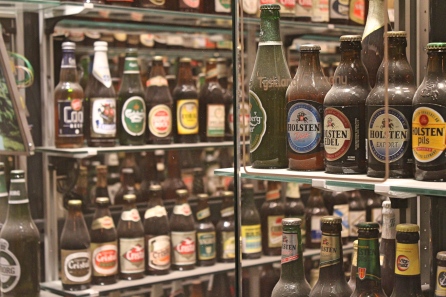 After our tour, we went up to their bar and got our free beers (included with each entrance ticket).

On the way back to our Airbnb we visited the local Aldi. Picked up a few things for dinner and were in for the night.

Our day started with a brisk walk to the Tivoli Gardens! One of the most well-known theme parks in Europe. To best explain what the Tivoli Gardens is, it would be as if a state fair and theme park had a baby. There are carnival games, lots of cute shops, kids rides, rollercoasters, and plenty of traditional European food with a few surprises. Including French and Danish crepes, large German beers, Flammkuchen, hot dogs, Italian, Chinese, and even tacos. These were all cast aside since we already had our first meal planned out.

We got there shortly after it opened and found a restaurant that served exactly what we were hoping for, Danish pancakes. After a bit of research, we found that sometimes these treats take the form of balls, other times they look more like rolled up crepes.

After some walking around we sat ourselves down at the restaurant for some coffee, hot chocolate, and Danish pancakes. Perfectly fluffy cakes with a side of jam and powdered sugar. Perfect for dunking our treats causing a big mess. 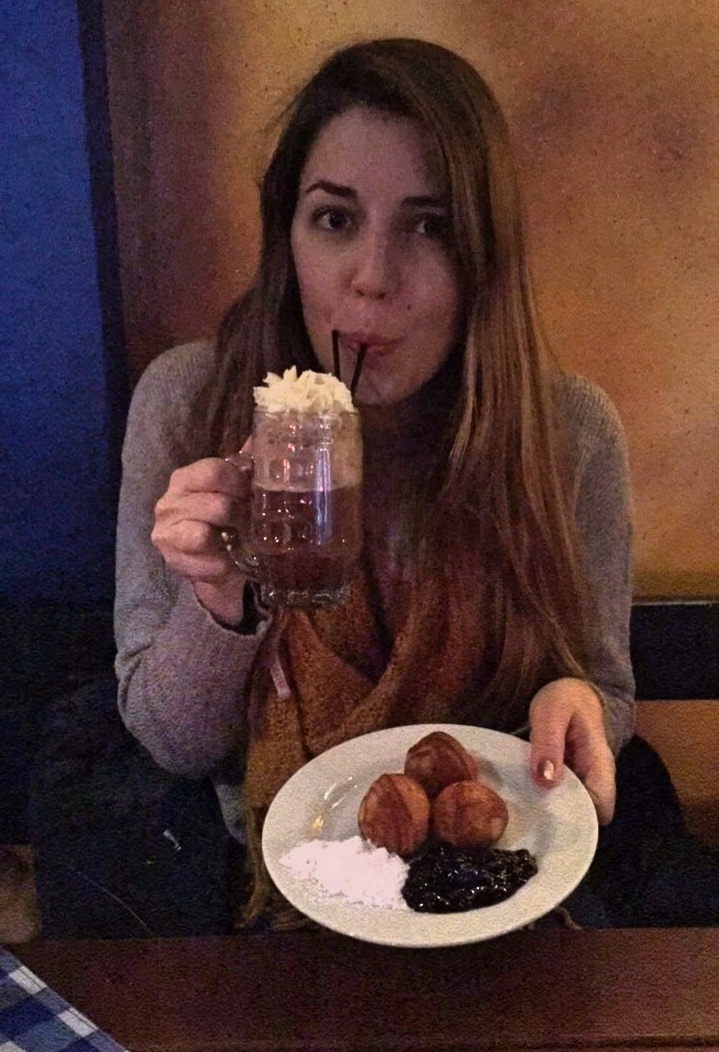 With full bellies we continued to explore the park.

With the Tivoli Gardens, you can purchase an entrance ticket with or without the rides. We opted for without the rides, since we really did not know what to expect and were more interested in saving money. There were plenty of rides that reminded us of the “pop up” county fairs we saw back home. The only difference was these were supposed to be permanent.

The place was decorated beautifully for the holidays but did seem to have a bit of a cheap feel to it. The decor was often run down or seemed out of place.

If you do ever visit the Tivoli Gardens and plan on going on the rides, we suggest buying the unlimited ride pass. It is definately cheaper. There was one ride M thought looked particularly fun. Turns out it was $12 for one person. No thanks.

After walking around a bit and not much to do for free, we decided to return later that evening for the twinkling Christmas lights.

On our way back to our Airbnb we picked up some hot dogs and warmed up back at our place.

After some rest, we went back out and explored the Tivoli Gardens at night. The entire place was decorated with fancy lights, beautiful trees, and the fanciest Christmas decorations. We wondered the park a bit, later returning to the beer garden for a couple drinks. One giant beer for M and a hot chocolate with Brandy for K.

Later that night we returned to our Airbnb, cooked up some dinner, and packed for an early train ride the next morning.

Airbnb: Our Airbnb was centrally located and rented out by a young girl with high expectations. We used Airbnb in Bali, Australia, and New Zealand loving each location. However, Europe has the worst Airbnb’s. They are typically just as expensive as hotels, lower quality than a hotel, and you have to deal with the renter. It works well for some situations, but in general, I would suggest a hotel when visiting Europe.

***One Way We Saved Money In Denmark: When we began planning our Scandinavian adventure we quickly realized it is a very expensive part of Europe. In preparation, we took to the internet to find a few ways to save money. With each post, I have decided to list one of our tricks!

Most of the hotels we booked had a kitchen or kitchenette attached. Going grocery shopping and cooking our meals instead of eating us out, saved us hundreds of dollars! Eating out is EXTREMELY expensive in Scandinavia but groceries are only slightly inflated. Frozen vegetables, fries, and simple meat options with a side sauce is typically what we ate when looking for food to cook. It did not require many side ingredients and typically there weren’t any leftovers.