We arrived in Amsterdam late in the afternoon but only had two days to see everything the beautiful city had to offer. After checking into our hotel we headed over to the Ann Frank House. Despite it being one of the main historical sites in Amsterdam, we assumed it would be a fairly quick stop.

Not so much. To just get into the Ann Frank house we waited outside in the cold windy weather for an hour. The line wrapped around the building and we were reminded once again of the benefit of buying tickets in advance.

Once inside, it was difficult to tell where exactly the house began. Turning old buildings into a museum is no easy task. But they somehow managed to squeeze in a ticket booth, gift shop, showing room, and security. No pictures were allowed.

Once inside what we were confident is the home, it was nothing like what I was expecting. M has already visited the home on another trip, but I was expecting something a little…different. It wasn’t the size or age of the building that surprised me. But there was no furniture. You were carefully guided from room to room with limited photos and information on the walls explaining where you were standing. In a line we continued through the home, following the squeaky wooden floors and ducking below beams. The home is about the size you would expect for the time period, but still unimaginable how constraining it would be for a group of people to be living and hiding for such a long time.

We later found out that Ann’s father did not want any furniture in the home and very much stressed how he wanted the home to be preserved.

That night we returned to our hotel where M had an online class. We ordered room service and woke up to a not so great hotel breakfast. Difficult after just traveling from Bruges where we woke up to a chocolate fountain.

M and I booked a morning tour of Zaanse Schans. A small quaint windmill city a quick 25 minute drive outside of the city center.

Zaanse Schans is beautiful! There are narrow rivers weaving throughout the small wooden homes decorated with flowers and vines. Not only are there rows and rows of cottages I want to own, but little mom and pop shops that make you feel like you are back in the day. A clog store with demonstrations on how the clogs are made. Pretty impressive. We even bought our own his and hers clogs.

We walked down another pathway and discovered a cheese store. They showed us how they make their select cheeses and offered us a free cheese tasting. The cheeses ranged from a sweet coconut to spicy and peppery.

The most impressive site in the little town was the windmills. Like out of a fairytale, they lined the rivers and continued to face the wind as they spun. Both M and I knew windmills were somehow used for producing goods but had not idea how intricate or diverse windmills are! We got to go inside the mills and watch the gears spin and slice giant logs into long boards. Another windmill we got to look inside grinder spices with a giant bowl and rock. It was a very fun process to watch!

Of course, as we continued to walk around the city it started to rain. So we quickly ran to our next stop. A Chocolate store! Where again, they showed us how they made chocolate and the science behind the cocoa bean.

After our tour our guide took us to a popular pancake restaurant. Every time you encounter the word “pancake” in Europe, you get a different variant of the thinly fried dough. Similar to the Swedish pancakes, we ordered some savory flapjacks. Large, thin, and covered in bacon, onion, tomatoes then topped with a fried egg.

We returned to the city center and headed to our next tour. Yes, we had another tour! Amsterdam is such an incredible city there was too much we wanted to see! We got tickets for a canal cruise and tour of the Heineken beer factory.

First, the canal cruise was terrible. The cruise started by the Heineken beer factory and then took us to the other side of town. M and I were very confused why they would bunch the cruise and beer factory tickets and then transport us away from the beer factory!? The cruise also failed to point out anything worth while. We especially noticed this when we passed the Ann Frank House and the tour guide didn’t seem to notice. If you are thinking about booking a canal cruise, do a lot of research. We found the tour on Trip Advisor thinking it would be good, but just ended up disappointed. 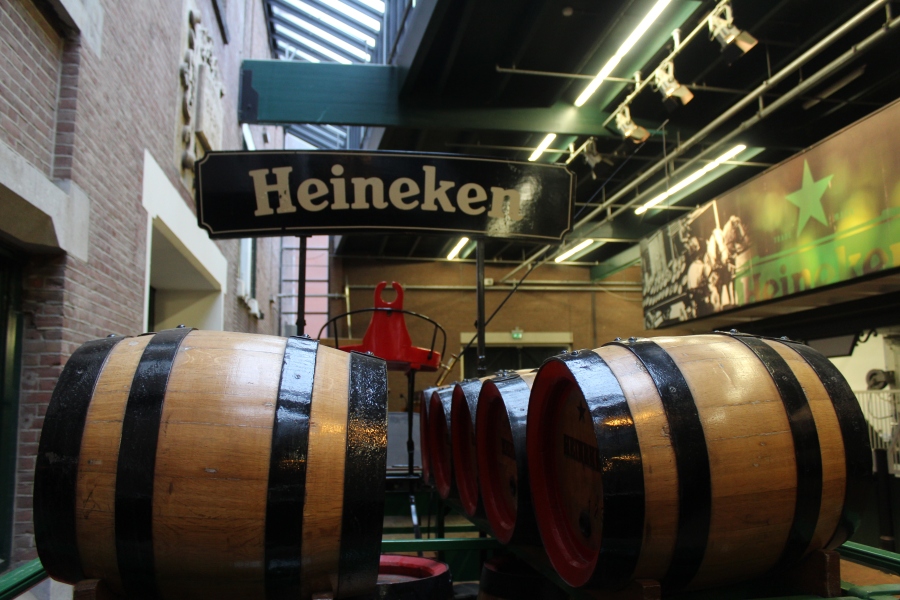 Once we traveled all the way back to the Heineken factory, we begun our tour. Walking from room to room we learned how the beer is made, tasted their sugar water, and played some of the beer themed games. They offered photos with Heineken logo stamped along the sides and even let you experience what it would be like to be a hop. Yes, we entered a little room and similar to like a Disneyland theme park ride, the room moved as a screen in front of us took us on a journey of the Heineken hop.

M and I got a few souvenirs. We designed beer bottles with our names etched onto the bottom and a Heineken glass to remember the experience. Our tour ended in their bar where we got a few free beers. And by “we” I mean M drank both of ours.